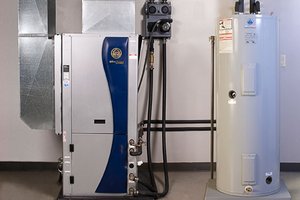 There is a steady flow of heat from the centre of the Earth (where temperatures are above 5000°C) through the surface of the Earth (-30 to +40°C) into space (-273°C)—heat flows from hot to cold. The heat is generated by the all-natural decay over millions of years of radiogenic elements such as uranium, thorium and potassium.

I’m a geo designer/installer based in the Canadian Rockies. Our area is devoid of nat. gas so geoexchange makes so much sense economically. Let alone environmentally. Of course it has to be completed right. That is why we go to school and get certified and pay fees to a skilled body to play watchdog and crack the whip.

Outside temperatures fluctuate with the altering seasons but underground temperatures do not modify as drastically, thanks to the insulating properties of the earth. 4 to six feet below ground, temperatures remain reasonably continuous year-round. A geothermal system, which typically consists of an indoor handling unit and a buried program of pipes, called an earth loop, and/or a pump to reinjection effectively, capitalizes on these constant temperatures to present free” energy.

Soil devoid of artificial heat addition or subtraction and at depths of various metres or more remains at a somewhat constant temperature year round. This temperature equates roughly to the average annual air-temperature of the chosen place, commonly 7-12 °C (45-54 °F) at a depth of six metres (20 ft) in the northern US. Because this temperature remains a lot more constant than the air temperature all through the seasons, geothermal heat pumps execute with far greater efficiency throughout extreme air temperatures than air conditioners and air-source heat pumps.

An addition like this would typically have about a 14,000 Btu/hr heat load on the coldest day of the year (viewed as 0˚F in the Rochester, NY location). It would also demand just below 1 Ton (12,000 Btu/hr) of cooling on the warmest day of the year (regarded 90˚F in this area). Both design and style loads would hold the indoor temperature at 70˚F.